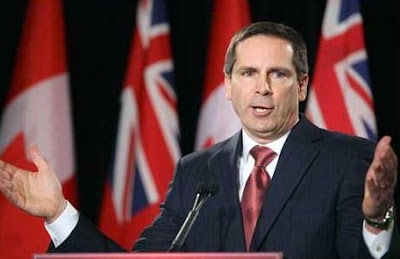 Daddy Dalton is doing himself in, great job Daddy, do Ontario a favour and hurry up!

Speaking in Ottawa, the premier said this year's 75-cent increase to $9.50 an hour from $8.75 will go ahead as planned next Wednesday.

But he said next year's rise to $10.25 an hour may have to be put off, depending on the state of the economy.

McGuinty said he will look at business conditions next year and make a decision.

Finance Minister Dwight Duncan revealed on Thursday that Ontario will rack up a projected record $14.1-billion deficit in 2009 as it commits billions to infrastructure projects and job retraining aimed at pulling the province out of the recession.

Duncan's budget anticipates Ontario will run a total deficit of $56.8 billion over the next seven years, and projects a return to balanced books no later than the 2015-2016 fiscal year.

Opposition parties have accused the Liberals of piling more taxes and debt on struggling families at the worst possible time.


And then today Dalton did his famous Flip Flop!

Premier Dalton McGuinty has backed off his threat to cancel next year's increase of the minimum wage to $10.25 an hour after an outcry from the opposition and anti-poverty activists.

A visibly contrite McGuinty scrambled to undo the damage in the Legislature yesterday after musing to business leaders behind closed doors in Ottawa last week that he might scrap the raise due to the recession.

"The fact is, it does call for some clarification on my part and I take responsibility for muddying the waters," the premier said in response to a question from NDP Leader Andrea Horwath.

"When we talk about the minimum wage, we have to ask ourselves what it is that we owe both our workers and employers. I think clearly we owe them fairness," he said. "Our commitment was to get the $10.25 an hour one year from now and we will honour that commitment."

On Friday – less than 24 hours after the scheduled wage hike had been highlighted in the provincial budget – McGuinty said the government would "have to take into account ... what's happening to the economy as a whole ... before we move ahead" with the raise.

That ignited a firestorm of controversy among anti-poverty crusaders who felt they had been betrayed.

Finance Minister Dwight Duncan, whose attempts to sell the budget were derailed by McGuinty's apparent breaking of a key Liberal pledge, originally made in 2007, told the Star editorial board that all's well that ends well.

"Well, I think the premier simply indicated on Friday that in next year's budget we would look at it. And he thought about it over the weekend, reflected on it and realized the policy that we had laid out in the '07 budget was the appropriate policy and we're going to continue," said Duncan.

An ebullient Horwath could not resist gloating a bit at McGuinty's "flip-flopping." "I'm sure the premier saw the error of his ways and acquiesced to my pressure today. It is irresponsible. People were really concerned about it, worried about it," the NDP leader said. "It shows that the premier's musings are ones that people ... can't trust."

Interim Progressive Conservative Leader Bob Runciman said the episode "certainly calls into question his competence and his understanding of this very significant budget."

"He's all over the map on so many things. It's not too many months ago he said it would be `crazy' to bring in new taxes in the midst of a recession," said Runciman, referring to the blending of the 8 per cent provincial sales tax and the 5 per cent GST into a new 13 per cent levy that will raise the cost of hundreds of products and services when it takes effect July 1, 2010.

"I don't think he misspoke. I'm not even sure if he was sincere in his comments on Friday," Runciman said, complaining the government is "not consulting" on anything from the tax change to the wage hike. Duncan was visibly flummoxed Friday as he struggled to explain why the possible cancellation of the minimum wage hike was not noted anywhere in the budget documents.

On Friday, aides to McGuinty insisted he had not misstepped, saying he was being "pragmatic" by acknowledging the economic slowdown would have an effect on the planned rise in the minimum wage.

The comments were not the first time in recent weeks McGuinty has caught members of his own caucus off-guard. Two weeks before the budget, some Liberal MPPs left a caucus meeting alarmed at the prospect of forging ahead with the harmonized sales tax.

The Canadian Federation of Independent Business, which has been expressing concern about the impact of today's hike to $9.50 an hour, was not amused by McGuinty's latest U-turn.

"This is no way to run a province – to keep changing your mind," said Satinder Chera, the federation's director of Ontario affairs.

Chera suggested the premier may have been trying to change the channel after criticism on tax harmonization.

"This government is sending mixed messages. It makes you wonder if they're playing politics with this issue," he said.

Jacquie Maund, the co-ordinator of Ontario Campaign 2000, said postponing the raise would have undermined the Liberals' pledge to reduce child poverty by 25 per cent within five years.

"Almost half of all poor children in Ontario live in families where at least one parent works full time all year," said Maund. "So, action to address the challenges of working poor families is key," she said.
Posted by SmellyBoxers at 8:24 PM