Another officer on criminal charges! 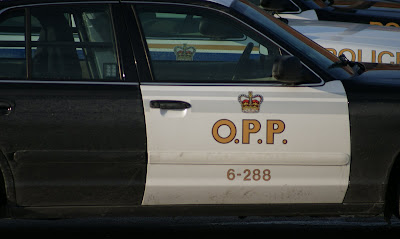 Another shocker, one of Julian's crew is up on criminal charges, I'm sure she is a great cop, outstanding community member and will no doubt be collecting full pay while all this hysterical nonsense goes through the courts while she exercises her Guaranteed Rights as Canadian citizen!

ORILLIA – An Ontario Provincial Police officer faces several charges, including attempted murder, in connection with a fire at a home in Timmins.

Detective Constable Cecile Fournel, 52, is also charged with arson, disregard for human life and administering a noxious thing, according to an OPP press release.

She is being held in custody until she appears in a Timmins court tomorrow.

The Timmins Fire Department responded to a house fire on Feb. 25, according to the release.

The lone female occupant managed to escape unharmed, but the fire caused extensive damage to the house.

The statement says Detective Constable Cecile Fournel and the female occupant are known to each other outside of the officer's professional duties.

Detective Constable Cecile Fournel is a 10-year member of the OPP and is stationed at the South Porcupine detachment.

She has been suspended from duty.

The investigation into the fire was conducted jointly by the Timmins Police Service and the OPP, who describe the case as an isolated incident.(lets hope so)