New Drinking and Driving Laws from the "Dalton Gang" 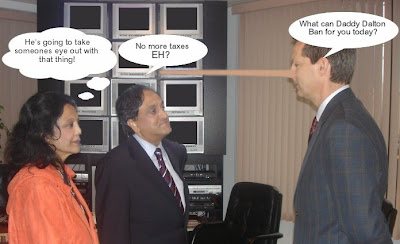 The new recession buster from the "DALTON GANG"


As of May 1st, a driver caught with a blood alcohol level between 0.05 and 0.08 — the so-called warn range — will have their licence suspended for three days

If caught with a similar level of booze in their system a second time, their licence will be suspended for seven days and the driver will have to attend an alcohol education program.

If caught a third time, the driver's licence will be suspended for 30 days, and the motorist will have to complete a remedial alcohol treatment program.
Drivers caught a third time will also have an ignition interlock condition placed on their licence for six months.

The roadside licence suspensions CANNOT BE APPEALED and will be recorded on the driver's record.

So much for having your right to a fair trial.
This has to be a good law with the prohibitionists MADD giving full support to the "Dalton Gang"
Posted by SmellyBoxers at 5:39 PM