Do street racing laws actually violate the Charter of Rights? 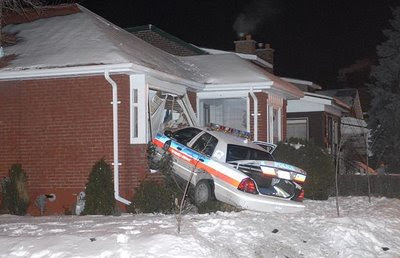 Written by Michael Friscolanti for Macleans.ca on Thursday, April 30, 2009


If nothing else, Ontario’s new “street racing” law has made for some amusing police blotter. There was that heavy-footed firefighter who had his emergency vehicle impounded for seven days (he was off-duty when a North Bay cop clocked him at 70 km/h over the limit). Another driver nabbed in the same part of the province also lost his wheels for a week—as did the speeding tow truck driver who came to impound the car. And then, of course, there was Antonio Talarico, the 26-year-old who made headlines across the country last month when his Infiniti G35 was spotted tearing down a Toronto highway at a whopping 250 km/h. His first words after being pulled over? “I’m sorry.”

The Ontario Provincial Police certainly isn’t apologizing. Or laughing. The force says the tough new street racing penalties—including possible prison time for anyone caught driving more than 50 km/h over the limit—are doing exactly what they were designed to do: save lives. In 2008, the law’s first full year on the books, fatalities on OPP-patrolled roads plummeted by almost one-third (from 451 to 322), and in the first three months of 2009 there were 17 speed-related deaths, a 29 per cent drop from the same period last year.

But 18 months and 11,000 charges after the law was first introduced, police and prosecutors are revving up for a legal showdown that threatens to quash some of cops’ newfound powers—including the luxury of treating every excessive speeder like a hard-core street racer. One justice of the peace has already ruled that a key section of the law is unconstitutional, and if defence lawyers have their way, the province’s highest court will have to weigh in on a question already being asked in traffic courts across Ontario: do jail sentences for speeders violate the Charter of Rights and Freedoms?

Adopted in September 2007, Section 172 of Ontario’s Highway Traffic Act was created to crack down on the fast and the furious. Anyone caught racing or “stunting” (doing doughnuts in a parking lot, for example, or cruising around town with a passenger in the trunk) will automatically lose his car and his licence for seven days. If convicted, the penalties range from a minimum fine of $2,000 to six months behind bars. At last count, 24 drivers have served at least one night in jail because they thought they were Paul Tracy.

But the “50 over” provision—though widely supported by the public—presents a constitutional conundrum. Nobody is saying that a jail sentence isn’t appropriate for a pair of reckless pals weaving through traffic on their way to an imaginary finish line. But that off-duty fireman driving 70 km/h over the limit? Or a late-night commuter who’s rushing home? Their infraction—plain old speeding—is already covered in the Highway Traffic Act, and the maximum penalty isn’t anywhere near prison. “At 49 km/h over the speed limit, you’re a member of society and you’re welcome to live amongst us,” says Gary Parker, a paralegal who has represented dozens of drivers netted by the new law. “At 50 over, you’re now a monster worthy of jail. It makes absolutely no sense at all.”

Simply put, speeding has always been considered an “absolute liability” offence. Once a person is clocked over the limit, there is basically no possible defence (unless he can prove the radar gun was defective). As a trade-off for such swift justice, the Charter guarantees that anyone who commits an absolute liability offence—i.e., he has no fighting chance to defend himself—can’t be locked away. Yet now, thanks to the new stunt-driving legislation, a form of speeding is suddenly punishable with prison. “It is unconstitutional,” says Brian Starkman, a lawyer who specializes in street-racing cases. “You can’t have an absolute liability offence co-exist with the potential for jail. That is settled in law.”

Starkman, among others, has tried to argue that point in court, hoping to have the “50 over” section scratched from the act. The courts have been unsympathetic—until now. Maclean’s has learned that earlier this month, a man in Burlington who was clocked at 60 km/h over the limit had his charges stayed after a justice of the peace, Barbara Waugh, agreed with the constitutional challenge. “I am the first one to win,” says Gary Lewin, the man’s paralegal. “She ruled that speeding is speeding, it is an absolute liability offence, and that the stunt-driving law breaches the Charter because now you can go to jail.”

Though significant, the decision does not set a precedent. Fellow JPs are free to follow Waugh’s opinion or ignore it. However, two similar cases have already been appealed to a provincial judge, and as the legal arguments creep toward the country’s highest courts, the results may force the Ontario government to raise the checkered flag. “If you’re using a highway as your own personal racetrack, that’s criminal,” Starkman says. “But if all you’re doing is speeding, then you should be charged with speeding
Posted by SmellyBoxers at 11:43 AM