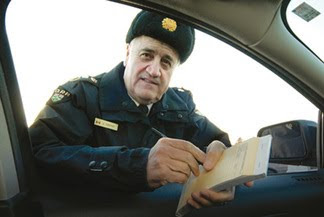 
No Spin and from The Toronto Sun, props for Connie Woodcock
I wonder what Fantino's fan club at the Sun thinks of this article?

I realize that makes a lot of people nervous in our secular society but as an active Anglican myself, I rather like it. Surely it's a good thing that the most influential police officer in Ontario is a happy warrior when it comes to the major Christian prohibitions -- no killing, for example, and no stealing. What can be wrong with that?

But a couple of weeks ago, he said something that bothered me to no end.

He was commenting on the decision of an Ontario judge that struck down a particularly contentious section of the law against stunt driving that allows police to seize a speeder's vehicle and licence immediately -- before the driver has been found guilty in court.

The judge found the seizures to be unconstitutional since the Charter of Rights and Freedoms guarantees a person is considered innocent until proven guilty.

But the OPP are going to continue seizing vehicles while the decision is under appeal and Fantino justified it by calling it "the Lord's work."

"When you look at the carnage that we're experiencing on our highways, the kinds of injuries we're having to deal with, the extraordinary health costs, the loss of productivity, the loss of a loved one, all of which is preventable, and you look at speed being a causal factor," he told a Sun Media reporter. "I think we're doing the Lord's work, personally. And we'll continue doing it."

Seizing vehicles is the Lord's work?

Oh really? Funny, but I don't recall the Almighty making any references whatever to "stunt driving" and I wasn't aware He got involved in constitutional matters, although I'm pretty sure that "thou shalt not steal" is up fairly high on His list of priorities.

And seizing the car of someone who has not been proven guilty seems a lot like stealing to me.

The particular case involved an Ontario grandmother who was caught doing 51 km/h over the limit. The stunt driving law kicks in at 50. She says stunt driving was about the farthest thing from her mind. She was just trying to get past a big truck as quickly as she could and who among us hasn't done that?

Professional drivers will tell you that you really don't want to be in the trucker's blind spot any longer than necessary.

There's a big difference between a woman passing a truck quickly and a bunch of kids in hot cars out street racing, but the law doesn't allow for differentiation. When you cross the 50 km/h threshold, you're done and the fine ranges up to $10,000.

The law has been called everything from ridiculous to odious and to hear the OPP commissioner say enforcing it is doing the Lord's work is offensive.

I wonder what he calls that other ridiculous and odious practice that allows Ontario cops to seize a vehicle when the driver blows .05 on a breathalyzer test even though the law draws the line on impairment at .08?

Now I don't like Bible "proofers" -- those objectionable people who are forever quoting scripture to prove whatever they want. But this time, I can't resist.

So here are a few words for the commissioner straight from the horse's mouth. "Blessed are those who show mercy; mercy shall be shown to them."

And better yet, "Blessed are those who are persecuted in the cause of right; the kingdom of heaven is theirs."

So no, I don't think Fantino is doing the Lord's work on this one. Maybe that other guy's, though...

The Toronto Sun
Posted by SmellyBoxers at 5:50 AM