Ontario deficit $2.5B worse than expected 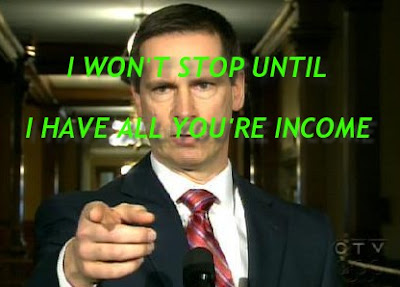 Ontario's deficit for the last fiscal year was $2.5 billion higher than expected, driven by a 48 per cent drop in corporate tax revenue.

But according to financial statements released Friday afternoon by the government, the deficit for the year stands at $6.4 billion.

Corporate tax revenues for the year totalled $6.7 billion, the statements show. In 2008, the government had pegged that number at $12.3 billion.

'Difficult choices ahead'
"As I've indicated in the past when we had numbers, we were very careful to say that there is enormous volatility in the economy," Finance Minister Dwight Duncan told CBC News. "Corporate taxes are historically the most volatile tax, and that volatility has come through."

Duncan also hinted that the government's projections for next year's deficit may go up. In March, he forecast a $14.1-billion deficit in 2009-2010.

"It'll depend on whether or not what we have seen up until March of this year continues on and it also depends on how quickly government revenues get restored to where they were," said Duncan, when asked about a possible change in that projected figure.

"One thing we know is that both growth in employment and growth in government revenues tend to lag growth in the economy. That's been the experience after every major downturn in the last generation."

The Ministry of Finance has predicted Ontario's GDP will contract by 2.5 per cent for 2009 before growing by 2.3 per cent the following year.

The government has some "difficult choices ahead," Duncan said, adding he would elaborate during his fall statement, expected in October.

He would not say if the government would stick to its plan to eliminate deficits by fiscal year 2015-2016.

Opposition questions Liberal credibility
The Progressive Conservatives said "it was no surprise" the Liberals waited until Friday afternoon to release the public accounts.

"We fell faster and harder than other provinces in this recession."

The New Democrats charged that the government was always playing politics with its budget forecasts and should agree to set up an independent budget office like the federal government's.

"Ontarians should expect an impartial budget document, not one clouded by partisan political spin like we've gotten from the McGuinty government," said NDP Leader Andrea Horwath.

"Each and every update out of the mouths of the premier and the finance minister was rosy. It turns out their spin was far from the truth," she said.

The province's debt grew this fiscal year by $14.7 billion, which included some accounting practice changes, to $113.2 billion, according to the documents.

But Duncan touted his government's management of finances, saying spending growth was brought to its lowest level in eight years.

Total spending for the year stood at $96.9 billion, an increase of 0.37 per cent from the previous fiscal year.

With files from The Canadian Press

CBC.CA
Posted by SmellyBoxers at 8:13 PM