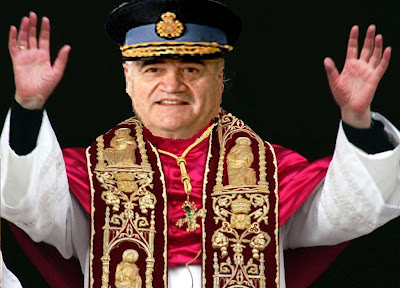 I love what "Mr Accountabilty" calls it!
This is same Comissioner who's on his second adjudicator and the THIRD appeal to have the second adjudicator tossed in the internal hearing up in Orillia..........That's hysterical nonsense
Hat's off to you Mr. Clarkson for asking some decent questions.

OPP Commissioner Julian Fantino calls it "the Lord's work."
He said his officers will "make no apologies" for continuing to enforce a law that gives police the power to impound vehicles, suspend licences, and slap high fines against drivers before the driver has a chance to appear in court.

After a Napanee judge ruled a section of the provincial anti-stunt driving law to be unconstitutional, Fantino defended the legislation as the "greater good" and said police shouldn't be regarded as the "bad guys" for trying to save dangerous drivers from themselves and others.


"We're saving lives," Fantino said. "The people who need to get their act together are those who are driving aggressively, who are driving dangerously, who in this case are driving in excess of 50 km/h over the posted speed limit. They're the ones who are the problem, we're not it.

"We're just trying to save them from being killed and killing other people," Fantino said.

Fantino's comments came after Justice Geoffrey Griffin ruled in a Napanee courthouse on Friday that a section of the province's stunt-driving legislation is unconstitutional.

Jane Raham, 62, was returning from Kanata when she was clocked at 131 km/h in an 80 km/h zone. She was charged with going more than 50 km/h over the limit and had her licence automatically suspended and her car seized for seven days.

Griffin's ruling focused on whether convicting Raham solely on the basis of her speed alone made the law an absolute liability offence, one in which an accused can't advance a defence that they acted reasonably or were mistaken in fact.

Because he found it did just that, Griffin ruled it was unconstitutional as it allows for up to six months in jail.

Fantino spoke with the Sun today about the court's decision and the legislation itself.

TORONTO SUN: An Oakville woman's conviction was overturned on Friday after a judge ruled that a section of the stunt-driving law is unconstitutional. Your thoughts?

OPP COMMISSIONER JULIAN FANTINO: This is the ruling of one court on one case. It doesn't strike down the law, nor does it prevent us from continuing to enforce the law, as is our authority to do. So we'll continue to do that and I'm sure that as with every other new law that we've seen come around, there's always this initial phase of appeals of appeals and so forth.

Contention is always on the forefront of new pieces of legislation. We had that happen with the RIDE program, there was all kinds of challenges about the the helmet law, the seat-belt law...we're going to keep enforcing it.

SUN: The argument was that a charge (under the legislation) can automatically lead to a fine, the vehicle being impounded, possible jail time. The lawyer (Brian Starkman) argued that there's no way to advance a defense under this law.

FANTINO: With all due respect to the court, the defense is to not speed over 50 km/h from the posted speed limit. That's the absolute defense. We make no apologies for continuing to enforce this until the issue is ultimately resolved. That will be something that will take place, for sure, in time.

And just for your edification, on OPP-patrolled highways, speed-related fatalities are down 30% since this law came into effect.

SUN: So you think that data speaks for itself?

FANTINO: I think it does. It's a greater-good kind of initiative. We don't consider this a frivolous piece of legislation, nor do we see it as a abuse of due process or peoples' rights or entitlements.

When you look at the carnage that we're experiencing on our highways, the kinds of injuries we're having to deal with, the extraordinary health costs, the loss of productivity, the loss of a loved one, all of which is preventable, and you look at speed being a causal factor, I think we're doing the lord's work, personally. And we'll continue doing it.


SUN: Surely you've heard the argument that it gives police the power to be judge and jury at the side of the road?


FANTINO: I totally disagree with that, because the judge and jury in this particular instance are the people who decide to drive at such an aggressive and dangerous speed.

They're the ones who are making the decision. We're just holding them accountable. That's what police do. We do that with the RIDE program with impaired drivers — we suspend their licenses, we impound their vehicles. That's all before anyone's convicted in court.

SUN: But that's the problem that people would have, that before they're convicted in court, their car is taken away.

FANTINO: That's fine but we also take away other tools or implements people use to break the law. No different — before they're convicted.

You know, we have to stop pointing the finger at police as the bad guys here. We're saving lives.

The people who need to get their act together are those who are driving aggressively, who are driving dangerously, who in this case are driving in excess of 50 km/h over the posted speed limit. They're the ones who are the problem, we're not it.

We're just trying to save them from being killed and killing other people.

SUN: Are you confident that the judicial system in Ontario will reflect your viewpoint — that the law is just in terms of protecting people?

You've said this is one court and one case. That said, do you feel confident that when all is said and done, the law will survive?

FANTINO: I think once the issues are flushed out and people in authority — the lawmakers, those who interpret the law — take a look at the carnage, the absolute tragedy of so many of these preventable situations...I think the greater good will prevail.

If it doesn't, well, you know, we don't make the law, we just enforce it. And we will indeed. And if there's modifications to be made, we will do that as well.

If there's one profession that's always adjusting to societal norms and standards, it's the police, and we'll do it in this case, too. But in the meantime, the legal advice that we have is that this decision does not prevent us from continuing to enforce what we believe to be a very valid, greater-good kind of legislation, and until we're told otherwise, this is the way we're going to go.