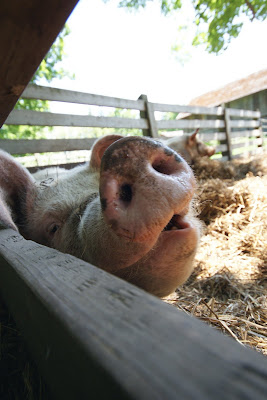 The plywood pen, which contained some bedding, was found with a note saying they were a gift to the premier, as there is no market for small pigs and animals are consequently being euthanized.

McGuinty chuckled when asked about the incident Tuesday.

"I've never raised piglets before, so it wouldn't be fair to them for me to take on that responsibility," he said.

But he added that he sympathized with pork producers.

It's up to consumers to "wise up to reality," McGuinty said, and keep in mind that the H1N1 swine flu virus is transmitted to humans by other humans, not pigs.

"So, let's cut the pigs some slack," he said. "Let's go out there as Ontario consumers, and let's continue to buy good, quality, healthful Ontario pork."

City of Ottawa bylaw officers arrived at McGuinty's office Tuesday morning, examined the animals and found them in good health. They turned them over to the Ottawa Humane Society.

Whatever the motivations for leaving these pigs in the middle of the city, it's disturbing that someone would make a choice to abandon helpless animals like this," said Bruce Roney, executive director of the society, in a statement. "Now, we're left to care for these piglets on top of the hundreds of abandoned and homeless domestic animals we care for on a daily basis."

Christine Hodgins, who works for McGuinty's brother Dylan and found the animals when she showed up for work, said she didn't think much of the apparent protest either.

The piglets were expected to be moved to a foster farm later on Tuesday. The Ottawa Humane Society is investigating and said charges could be laid in the case.

Ontario hog farmers appealed to the Ontario and federal governments for help earlier this year, saying increasing costs for essentials like feed and fears around swine flu have made it difficult for them to earn a living.

The federal government has been working with pork farmers to develop a long-term loan program as well as an initiative to help pork producers get out of the hog industry.

CBC.CA
Posted by SmellyBoxers at 3:41 AM